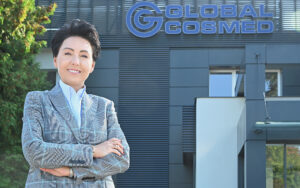 According to Global Cosmed, the current stock market valuation does not reflect the company’s value and its development potential. Hence, the company, which last year achieved record financial results and at the same time strongly expands the portfolio of products and markets served, is buying shares.

The program’s dynamics will grow with each passing day. According to the law, it is possible to buy up to a quarter of the average daily trading volume of shares from the last 20 trading sessions. When the operation was launched, it was possible to purchase 5,000 shares, and now, with the increase in turnover, almost 7,000 shares per day. The transactions will be carried out until October 15, after which they will be suspended for a month due to the closed period prior to the publication of the consolidated quarterly report for the 9-month period of this year.

„We know that the current detailed analysis of the market, its potential in basic segments and the development course we have taken, bring numerous competitive advantages. Investments in technologies, raw materials policy, an increasingly natural composition of our products and the implementation of the path of building flexibility and productivity have already borne fruit in the company’s results so far. These are long-term investments that pay off,” says Magdalena Mielimonka, Vice President of the Management Board of Global Cosmed S.A.